As a scientist investigating visual systems, I am familiar with optical phenomena some of which elicit surprising and aesthetic visual effects that are quite suitable as jewelry motifs. The optical function thereby, strongly influences the form of the jewel. I mostly use little mirrors and their resulting interplay with each other and with coloured elements. 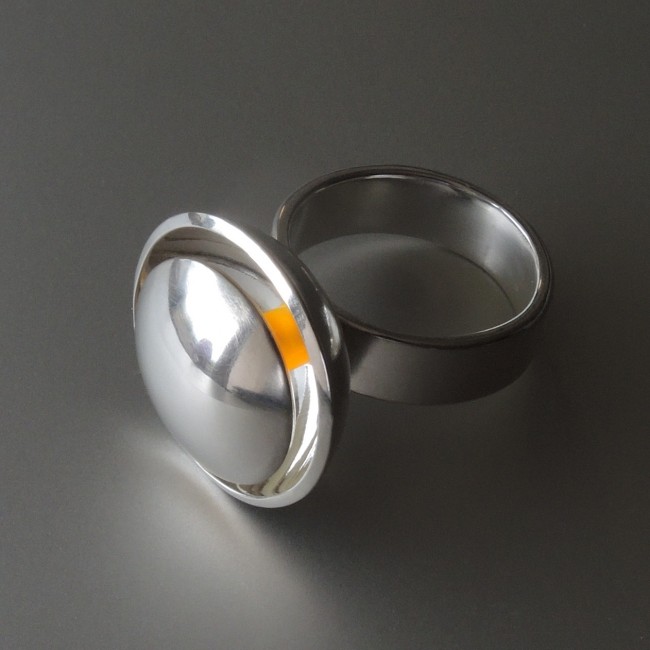 Finger ring, also as a pendant
Silver 925, dyed plexiglass, mirror diameter 22 mm
The optics of the "Ring of Fire" is based on the same principle as "Antenne". But here most of the mirror aperture is hidden behind a lens-shaped cap. This produces bright a ring of color along the periphery of the mirror the shape of which depends on the viewing angle. 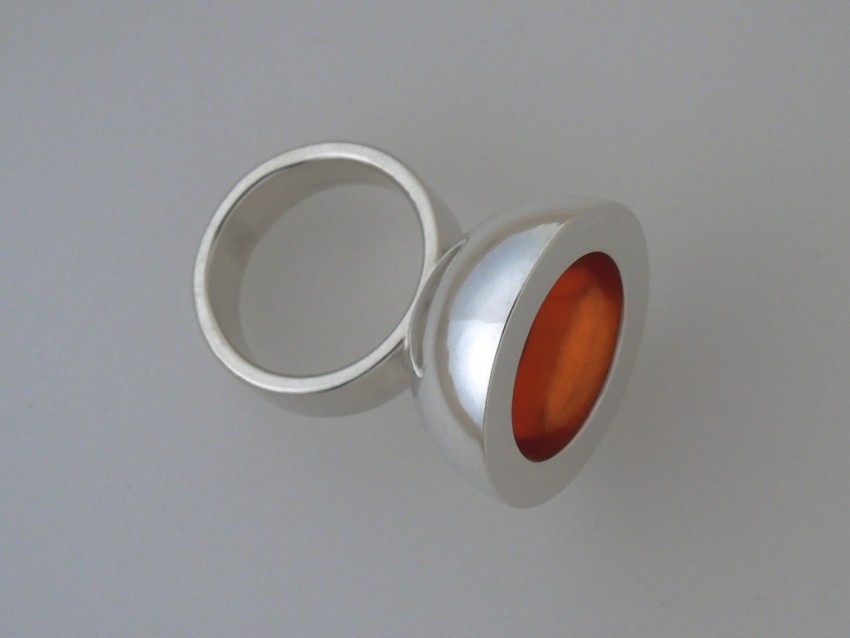 (Eye ball)
Finger ring
Silver 925, transparent color foil, diameter 26 mm
A hemispheric, concave silver mirror is confined to its central part by a cylindrical wall, which is lined by an amber-colored transparent foil. Looking at the mirror you see the mirror image of yourself in the center, downsized and upside down, as expected. However, the amber "iris" appears convex/to be curved to the outside like an eye ball. Rotating the piece will increase this optical effect. 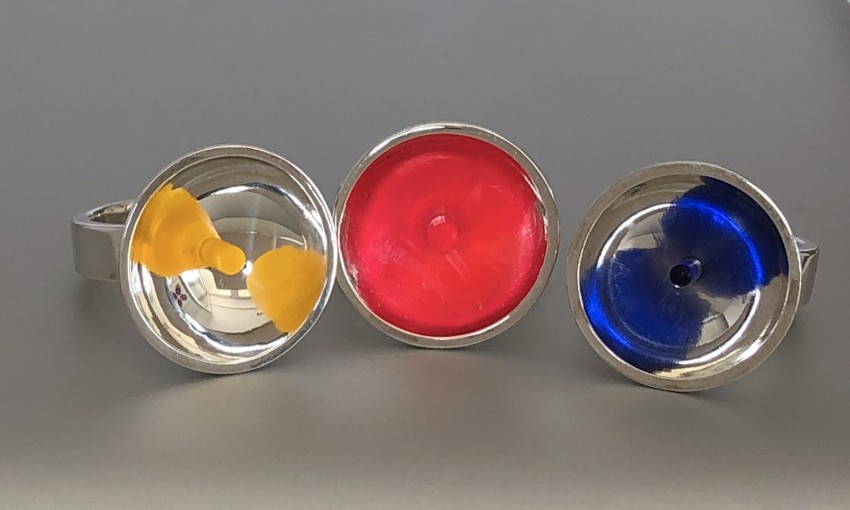 (antenna)
Ring (also in blue or yellow, and as pendant or ear studs)
Silver 925, dyed plexiglass, mirror diameter 20-25 mm
The small concave silver mirror resembles a dish antenna. In fact, it functions like an antenna, in this case for light rather than radio waves. When the mirror is directed towards a light source, the small plexiglass rod in the focal point of it collects the light and starts glowing. Looking straight into the mirror instead, a surprising, strong red shine fills the entire mirror: now the mirror emits light from its focal foint where the red rod resides. 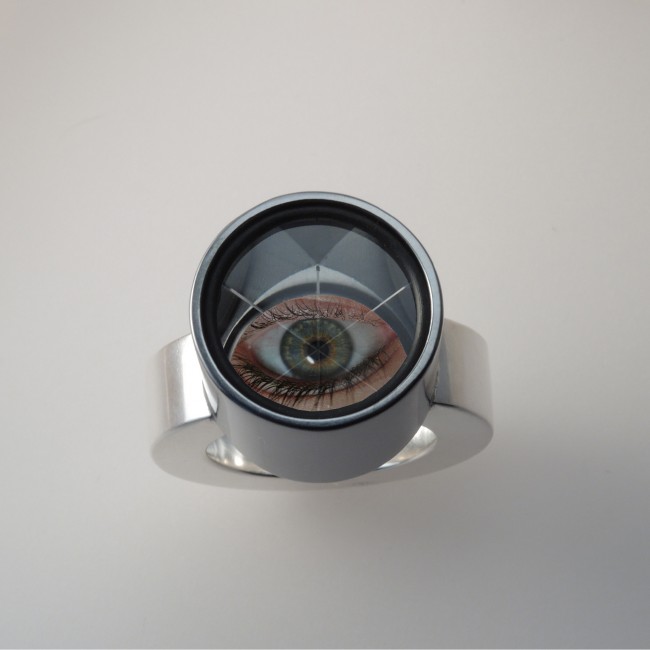 Little brother is watching you

Ring (one of a kind)
Silver 925, partly sulfide blackend, cut glass, o-rings
The black tube contains a so-called corner reflector, a high-precision optical element, which returns each light ray to exactly the same direction from which it originated. Looking into the tube, you see the mirror image of your own eye, independent of the angle of view: the eye seems to trail you. 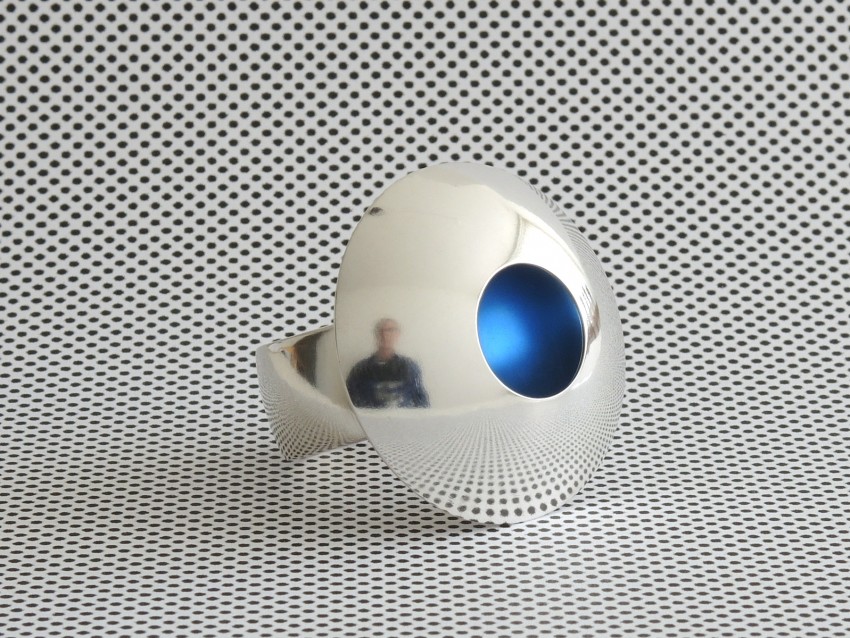 Finger ring, also as pendant
Silver 925, blue enamel paint, diameter c. 35 mm
The motif "Downunder" consists of a concave, uncolored silver mirror, which is covered by a dome with an opening in the center. Downunder allegorizes the continent of Australia, resting in the blue of the Indian ocean. Looking straight into the opening you see your own mirror image, downsized and upside down (what a fast way to travel to Australia!). When changing the angle of view and looking at the mirror at an oblique angle, the mirror image vanishes and a deep blue shine (the ocean) appears. 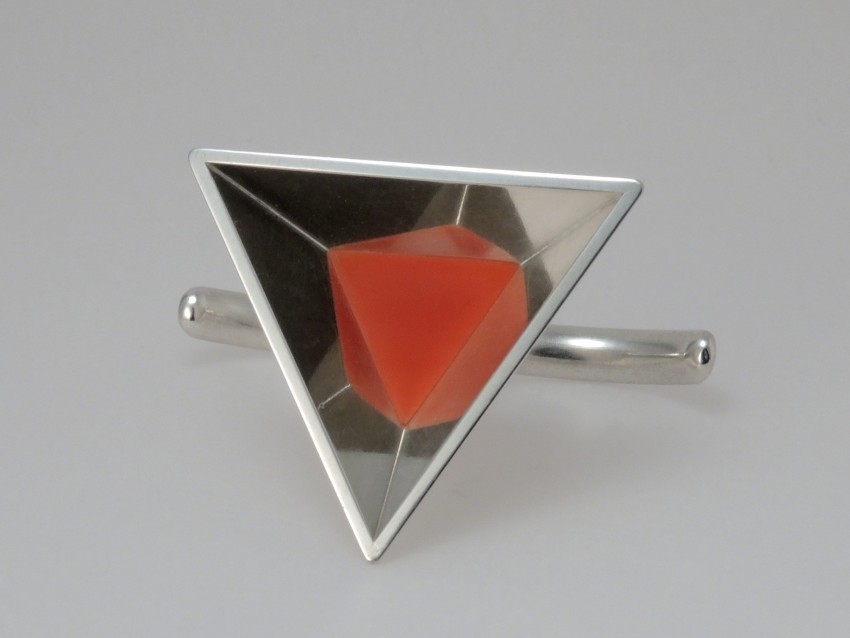 (2D/3D converter I)
Hand ornament
Silver 925, dyed epoxy resin, sides c. 32 mm
Three silver mirrors are arranged orthogonally to each other; in their middle resides a red, equilateral triangle. The triple specular reflection generates a visual space "behind" the mirrors and transforms the two-dimensional triangle optically into a three-dimensional body (an octahedron). Mounted on a ring, the inverted pyramidal structure is somewhat bulky, but the vertex of the pyramid fits snugly between two fingers. An "anchor" of sorts secures the jewelry piece to the hand. 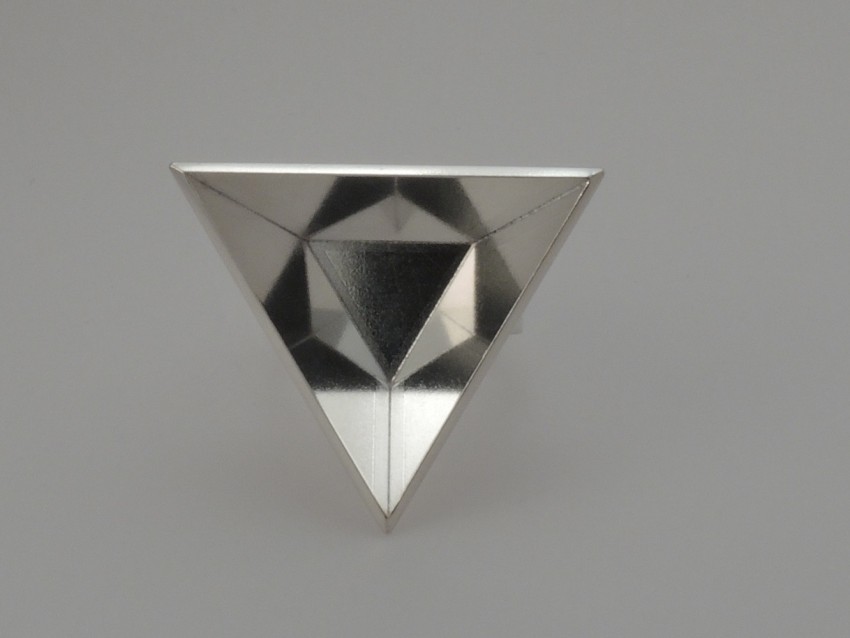 (2D/3D converter II)
Ring
Silver 925, dyed epoxy resin, sides c. 32 mm
This is a variant of 2D/3D-Konverter I: here, the tip of the pyramid, which is unnecessary for the optical effect, is cut, making the motif fit for ring-mounting. Note that for the triangle in the middle of the mirrors, any color and material can be used (in this case silver and gold), which in turn defines the character of the octahedron. 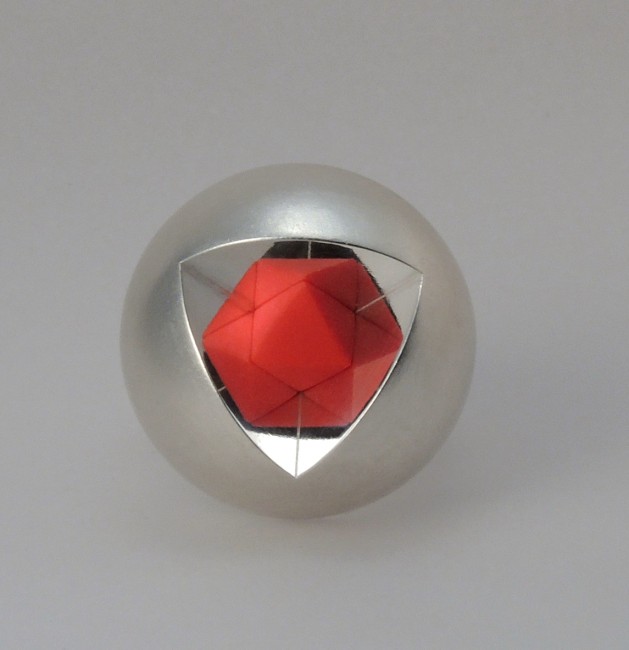 (form converter)
Ring (one of a kind)
Silver 925, Fimo, hemisphere diameter 24 mm
The optical effect in this ring is based on the same principle as in the "2D/3D-Konverter". However, here the triple mirror is embedded in a silver hemisphere that truncates the sharply protruding corners. Through multiple reflections of the red geometrical object, a new form is generated. 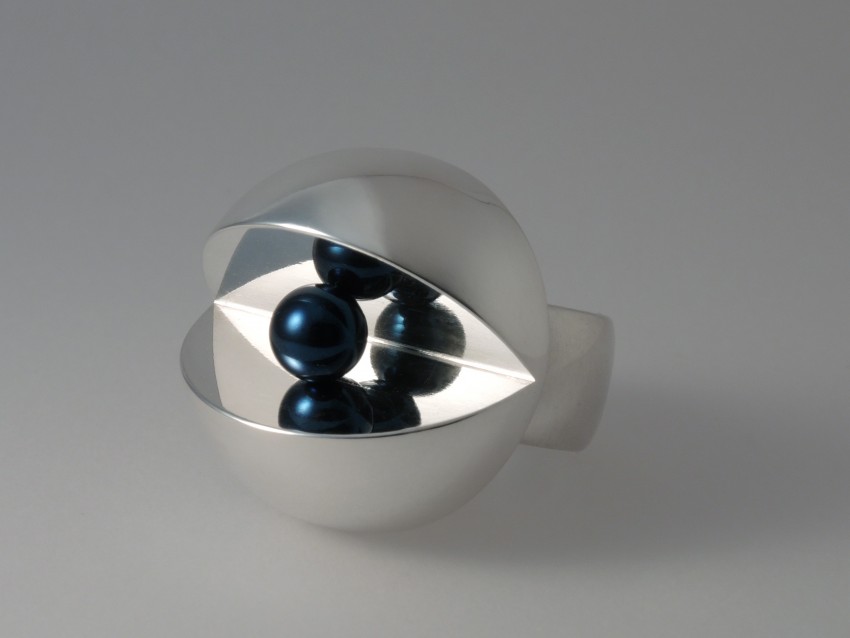 (wondrous proliferation)
Ring
Silver 925, oxydized steel ball, diameter 24 mm
Two silver mirrors, oriented at an angle, are mounted in a silver hemisphere. They hold a "pearl", a thermally colored steel ball, between them. By repetitive reflections on the two mirrors, the ball becomes optically multiplied and appears six times, arranged in a circle. The pearl can easily be replaced by a differently colored one. 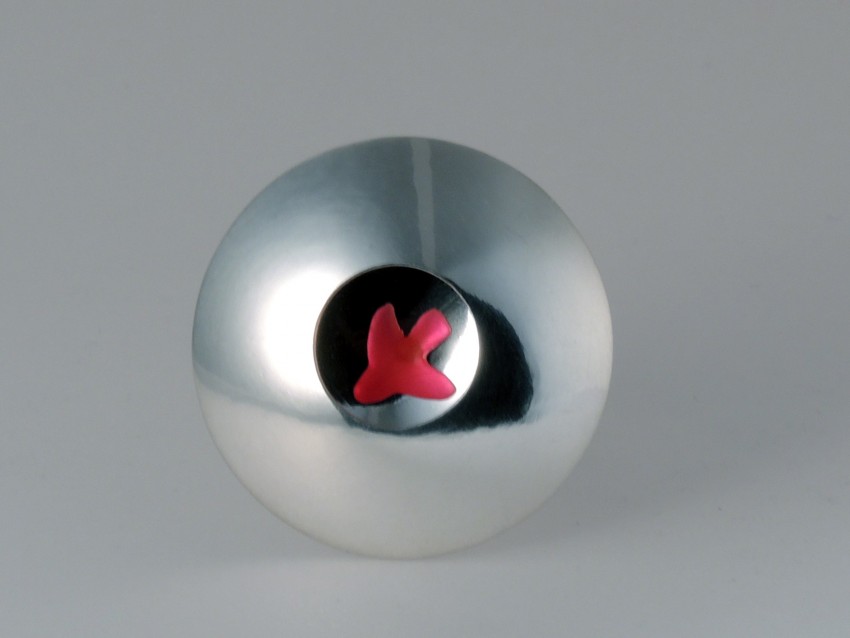 (fly, little bird, fly!)
Ring
Silver 925, dyed plexiglass, diameter c. 30 mm
The lens-shaped motif consists of two concave mirrors, which are stacked on top of each other; the upper mirror has a circular opening. Looking straight into the jewel, you see a little red bird sitting on the lower mirror. When the viewing angle is changed such that the bird is hidden behind the upper mirror, the bird suddenly re-appears, seemingly suspended in air inside the opening: the bird has flown up higher. This effect occurs only under specific mirror-geometrical conditions. I have also used a bee instead of a bird. 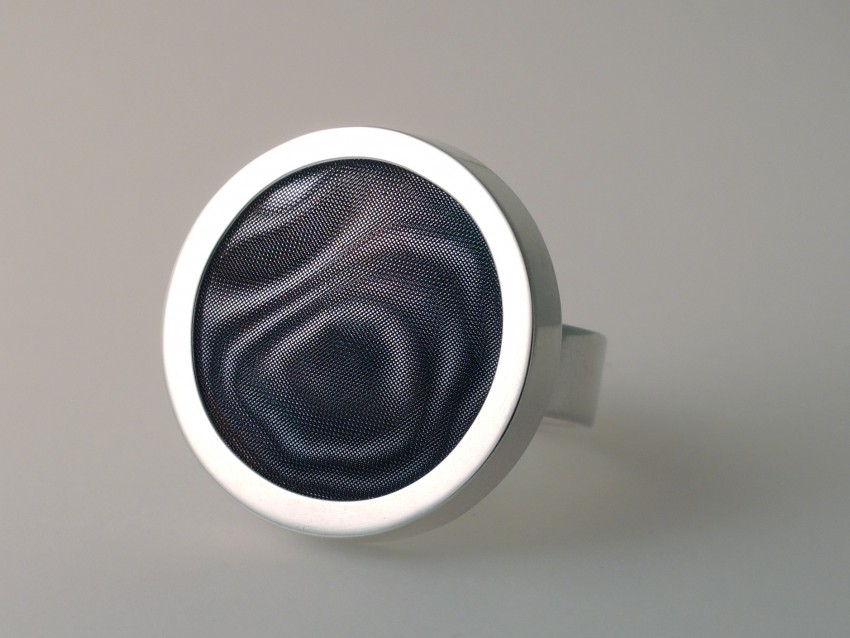 Ring
Silver 925, steel mesh, metal mirrror, diameter 27 mm
The Moiré effect is an attractive optical phenomenon that is generated by optical interference of two regular lattice structures. This ring uses a fine metal grid that interacts with its own mirror image. The structure of the Moiré pattern depends on the viewing angle, tilting the ring sets the pattern in motion. By thermal treatment (annealing) the steel grid received a multicolored appearance. 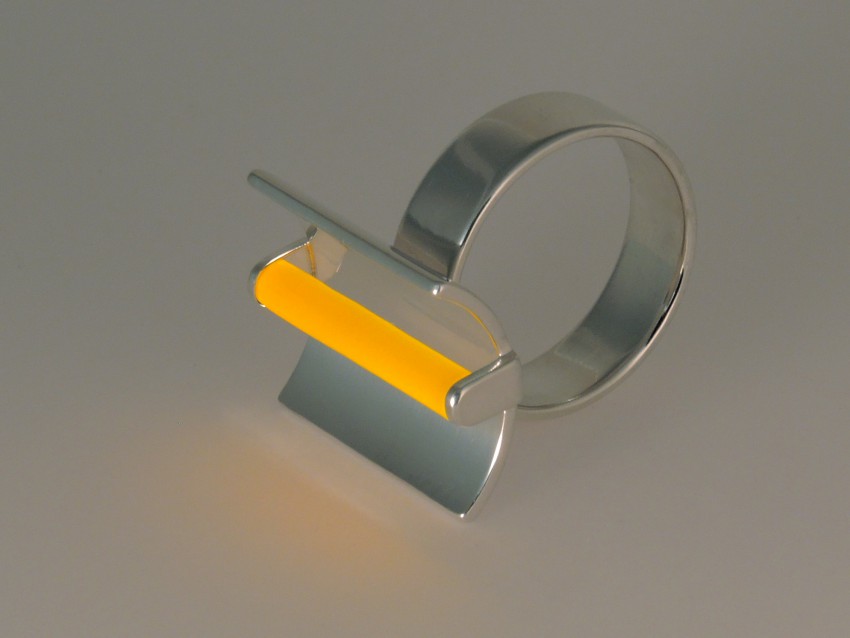 Silver 925, yellow plexiglass, reflector length 20 mm
The zylindrical reflector with the fluorescent plexiglas rod resembles a "neon lamp". When the mirror is directed towards a light source the rod starts to glow, indeed. The effect is most impressing in the dark when the mirror receives some light from a just weakly lit window or from the moon. Looking straight into the mirror, a strong yellow shine fills the mirror: the mirror emits light from its focal point where the yellow rod resides. 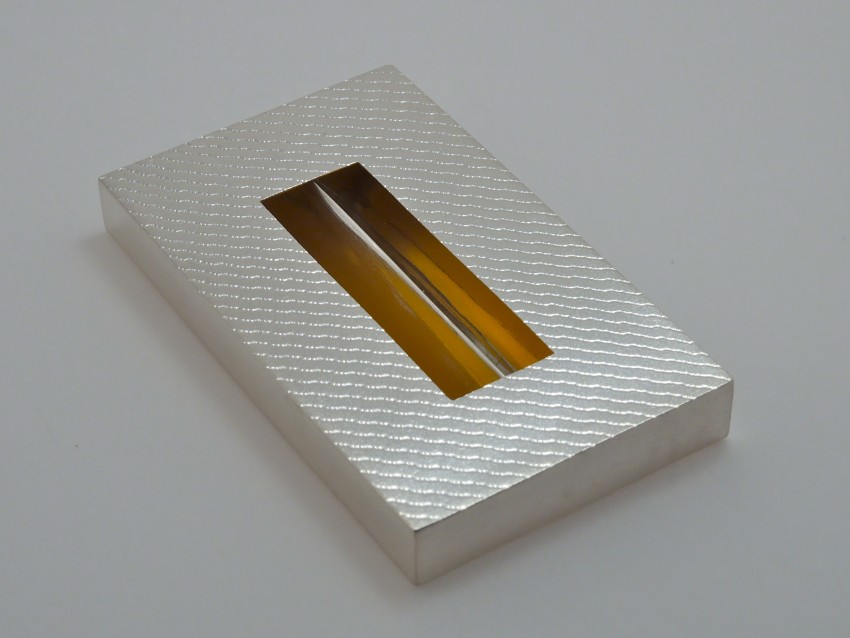 (treasure box)
Brooch, object (one of a kind)
Silver 925, color paper, textile embossing, 50 x 30 mm
The lustre of gold treasure shines through the rectangular window of the small silver box. Just an illusion! It is just the reflection of yellow paper lining the walls of the box, created by two concave silver mirrors.