My "Objects" are miniature sculptures, toys or just little gadgets... 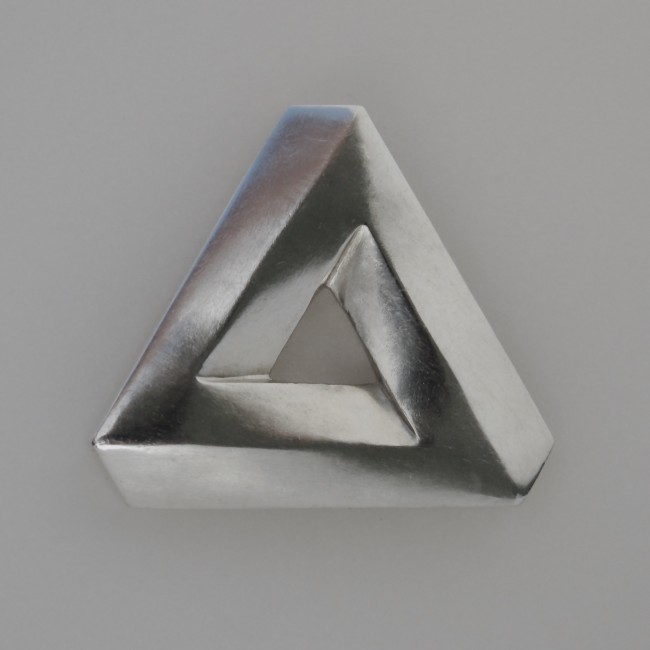 Object
Silber 999, sides 32mm
The „Penrose triangle“, also known as „tribar“, is a so-called "impossible object". It appears to be a solid made of three straight beams which meet pairwise at right angles at the vertices of the triangle they form. Although the Penrose triangle can be easily be drawn in a 2D plane, it is impossible to construct it as a 3D object ( https://en.wikipedia.org/wiki/Penrose_triangle ). For a 3D representation (here as a relief) I had to use a little trick. The two tribars shown are sand casts, based on a wax model, one was polished the other was left as a cast blank. 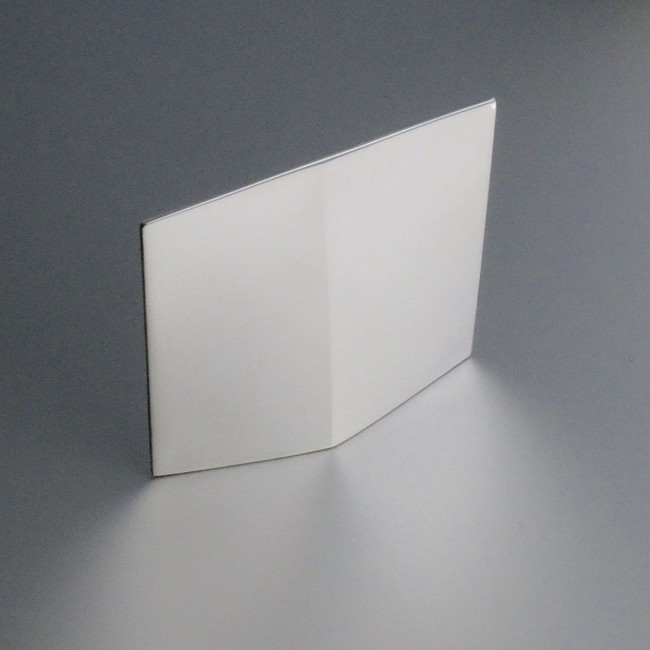 (Blade)
Object
Silver 925, 43 x 43 x 10 mm
In the same way as the metamorphosis rings, the profile of the little sculpture gradually changes, here from a line (top) to an elongated lozenge (base). The different, slightly curves surfaces were formed by mere manual bending of silver sheet, which imparts an interesting tension(??) to the elegant sculpture. 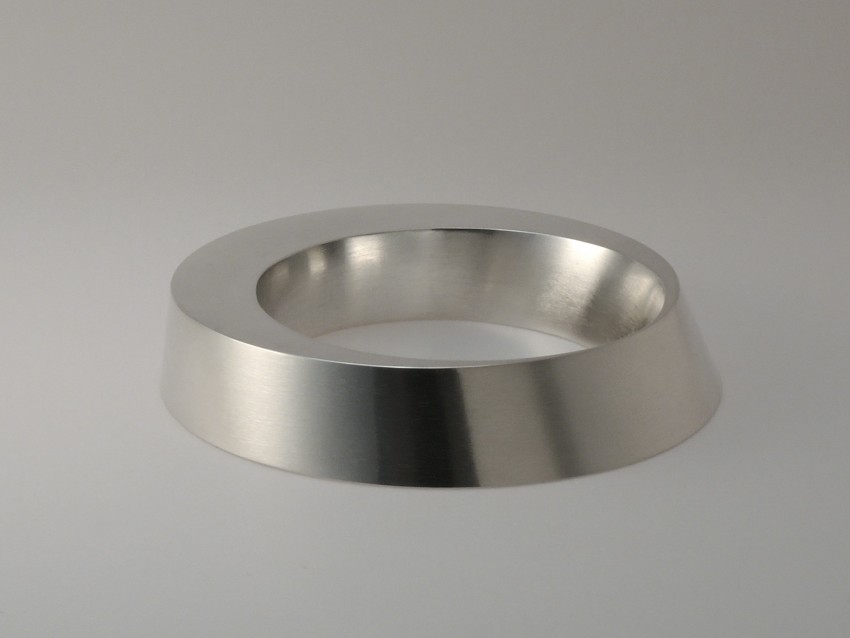 (Hommage à Bruce Naumann)
Object (one of a kind)
Silver 925, cast, diameter 62 mm
The form was worked out of a block of file wax and cast in silver by Brogioli (Schaffhausen). For this piece a large (c. 3 m) sculpture by Bruce Naumann, on exhibition at the Kunsthaus Zurich, served as a model. The profile of the torus varies gradually between an equilateral triangle and a square. Possibly, this form sparked the idea of the "metamorphosis rings", shown elsewhere. 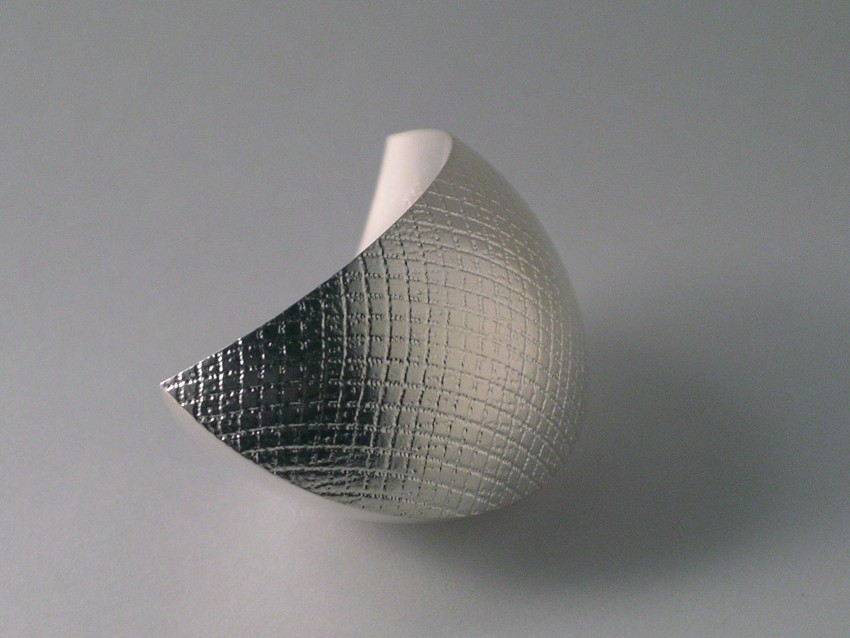 Hand teaser, toy, object
Silver 925, 37 mm long
The crescent-shaped object is composed of three spherical shell segments. Smooth concave and convex surfaces caress the hand, sharp edges and points stimulate it. Luna is also a toy: when rotated at high speed on a smooth, flat surface, it suddenly (and surprisingly) rises on one edge and stands still.

(once upon a time)
Bookmark
Silver 925, 16 to 18 cm long
I scanned text from an old book of fairy tales and printed its mirror image out on paper. Two strips of this paper together with a thin silver strip are passed through the rolling mill. Due to the difference in texture of paper and letters the text becomes visible on the bookmark. From which fairy tale is the text on the bookmark? 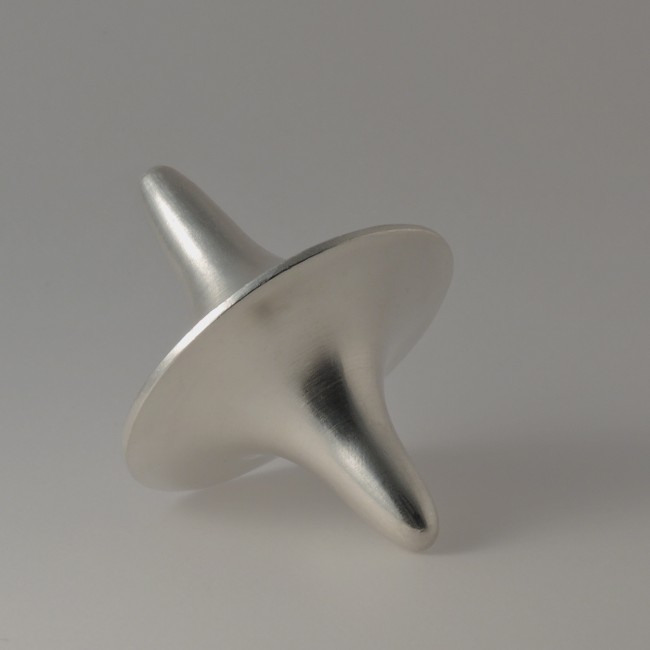 Spinning top (one of a kind)
Fine silver, sand cast, diameter 37 mm
Not the golden ball from the fairy tale of Frog King, but a spinning top of fine silver, at least! Due to its weight, the elegant object reaches a high torsional moment, but because of the high center of gravity it can keep upright at high revolution speeds only. A flop? No, a little challenge to get this thing running! 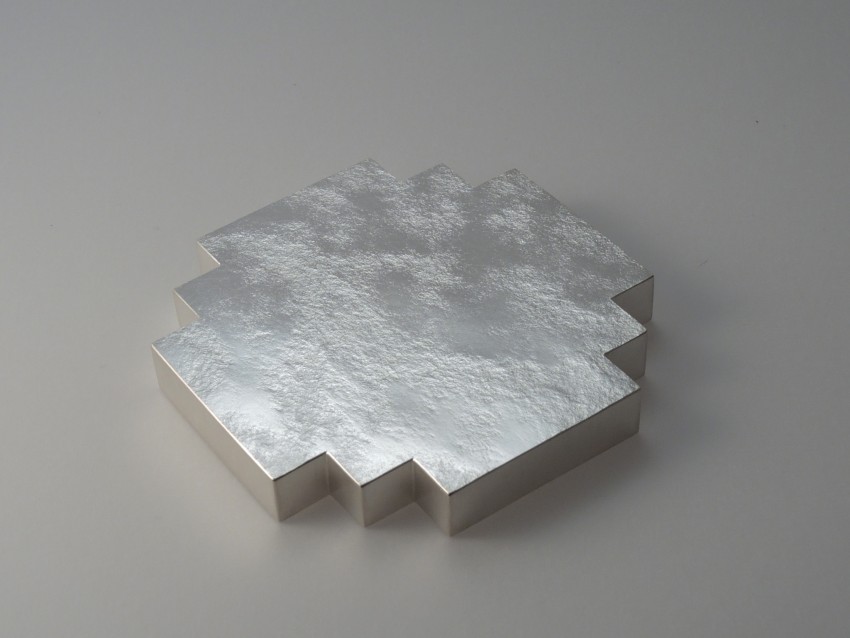 Object (one of a kind)
Silver 925, paper embossing, 45 mm x 45 mm
At the archeological excavation site of Agia Triada in Southern Crete, a flat blue stone of peculiar shape was exhibited under a canopy: a column foot from lapis lazuli? Unfortunately, I was unable to identify the stone's function. But the shape was interesting, and I decided to replicate the stone in a downsized version in silver.