For those who are already familiar with my earlier work, I have collected some of my latest creations here. I am still fascinated by optical effects, and I found that jewelry is also a wonderful platform for expressing somewhat bizzare ideas. As before each of my pieces comes with an short explanation or a little story. 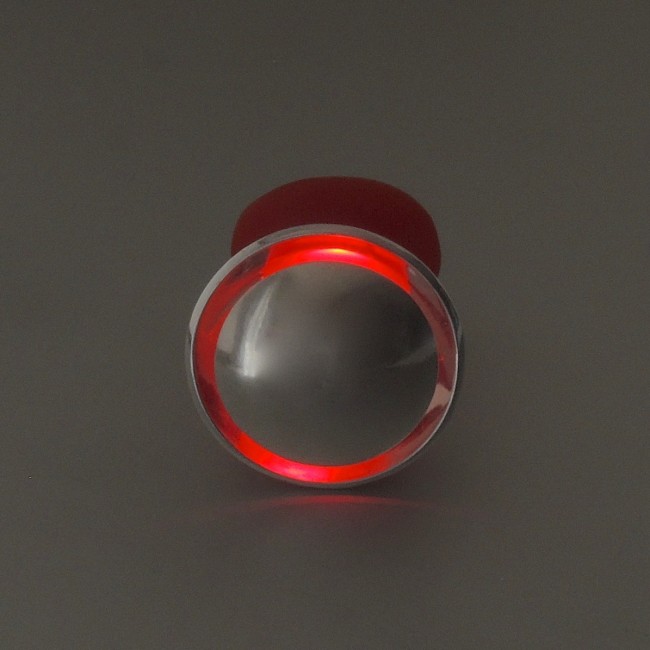 This luminous hand ornament has evolved from the previously described model "Ring of Fire" (see link below). Here, the little plexiglass rod in the center of the concave mirror is replaced by a red LED which is fed by a button battery. A position switch turns the LED off when e-Ring of Fire ist turned upside down.

In earlier years, I have worked as a zoologist in basic research studying the function of insect eyes (see section About Me). Night-active insects exhibit an interesting optical phenomenon, termed "eye glow": irradiated by a flashlight in the dark their eyes light up and seem to emit light. This is because part of the light entering the eyes is reflected back by a mirror-like structure in the eyes (a so-called tapetum), a mechanism which increases the light sensitivity of the eyes. An analogous phenomenon can be observed in some night-active mammals, for instance cats or foxes.

This hand ornament simulates the phenomenon of the eye glow -- 100 times enlarged. Insects have so-called compound eyes consisting of a large number (c. 100 to 10'000) of light-sensitive modules (so-called ommatidia). Each of them looks in a slightly different direction, thereby providing the insect with a mosaic-like image of the visual world. The 3d-printed black hemisphere with its numerous tubes (the ommatidia) imitates such an insect eye. It houses an LED light source in its center, the light of which passes through the ommatidia to the outside. Because the ommatidia look in different directions, only a small group of them appears bright, a group that wanders across the eye as the hemispere is turned. The effect is clearly visible even in bright daylight! A position switch turns the LED off when Eye Glow ist turned upside down. 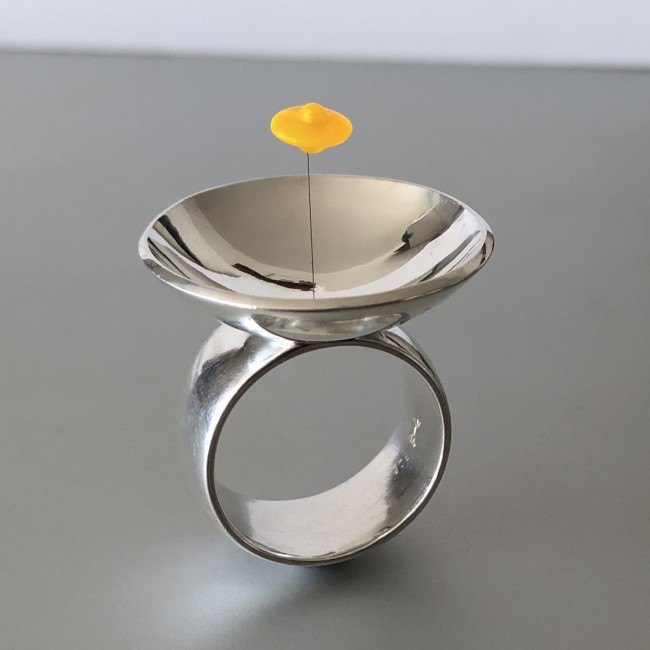 A small yellow UFO "hovers" above a concave silver mirror. Suspended by a fine, hyperelastic wire, the slightest hand movement causes the UFO to oscillate back and forth or to move around in circles. The concave mirror produces an image of the UFO, such that instead of one UFO two of them are visible. The two UFOs move in opposite directions such that the two spacecrafts seem to chase each other. 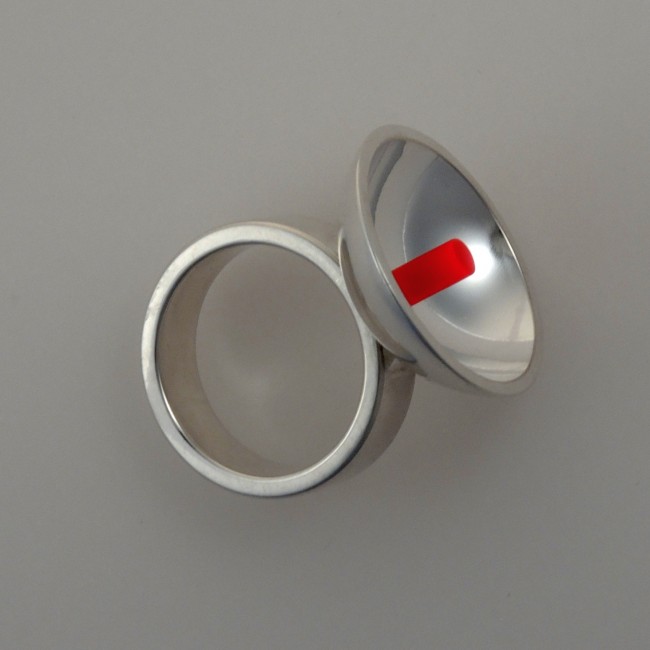 "Antenne vibro" is a new version of the previously described model "Antenne" (see link below). In this version, the little plexiglass rod positioned in the focal point of the concave mirror, which produces the astonishing color effect, is not rigidly fixed in the vibro version but sits on a fine hyperelastic filament (Nitinol). When wearing the ring, the little rod and with it the red reflection on the mirror are constantly vibrating. As fascinating as this may be for the wearer, it can be quite irritating for your vis-à-vis during a conversation -- perfect for a difficult business meeting ... 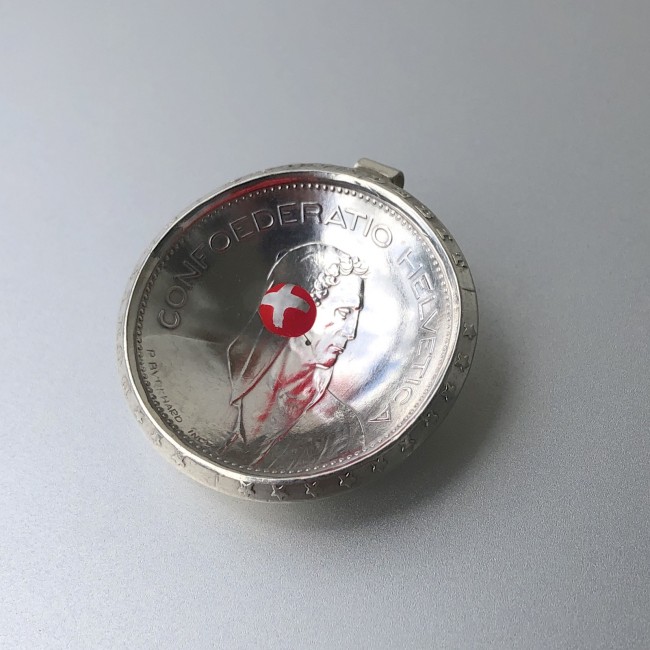 The optics of this pendant is principally the same as in the motive "Antenne" (see link below). But here the concave mirror is formed from of an old Swiss silver coin showing the mythical character of Willhelm Tell (instead of a plain silver plate). Depending on the viewing angle either William Tell is blushing or the little the red apple with the Swiss cross begins to glow. 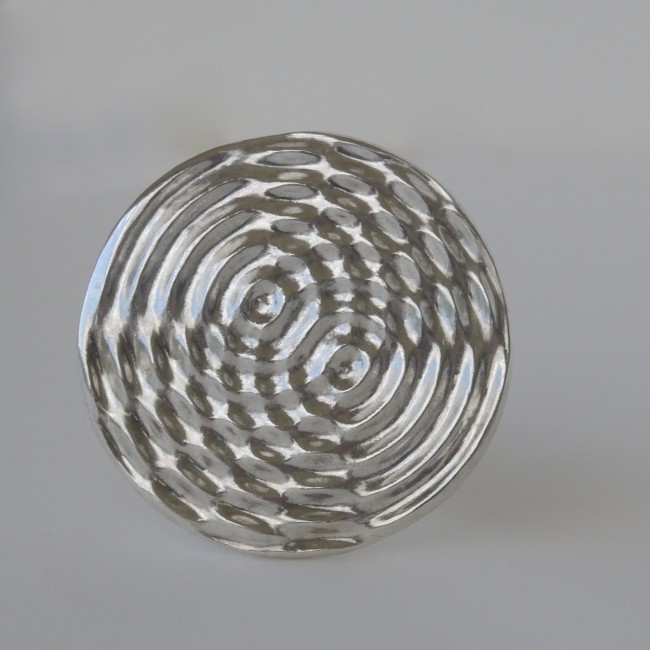 Rain drops create little circular waves on quiet water surfaces which overlap and form fascinating wave patterns, so-called interference patterns. Could they possibly be reproduced in silver? The problem is that water is liquid and the wave patterns are constantly changing such that molding with plaster is impossible. But these wave patterns follow physical laws and can therefore be simulated mathematically. Using a computer program the interference pattern of two overlapping circular waves are calculated and visualized on the monitor as a virtual reproduction of the pattern. A snap-shot of the wave pattern is then reproduced in plastic by 3d-printing, representing a real reproduction of an interference pattern. It serves as a model for a silver replica by sand casting using the casting ring method. The cast spigot serves as an "achor" for the resulting hand ornament.

The motive Wellenspiel can also be mounted on a ring band, here oxydized black indicating deep, but not still, water. 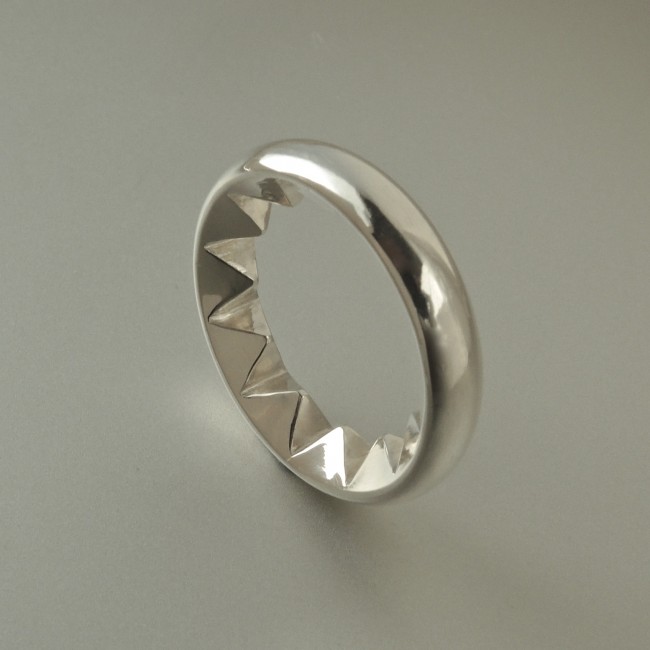 In spite of the menacing thorns on the inside, wearing this ring is quite comfortable. This is because the twelfe thorns distribute the pressure on the finger equally, in the same way as the multitude of nails of a fakir's nail bed prevents the fakirs body from pain.
Fakir comes in different versions: in silver or black resin (3D printed), ringband profile on the outside rounded or with a ridge. 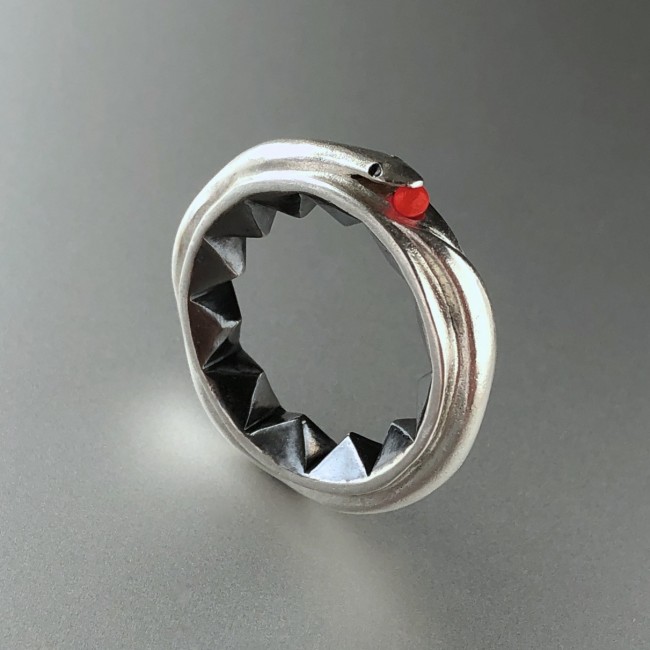 The "Penitent ring" is an alternative interpretation of the "Fakir" motive. Whereas the outside of a Fakir ring is plain, Eve's snake with the apple in its mouth, a symbol for the original sin, coils around the Pentintent ring. Sinners must wear this ring with the extra pointed thorns for seven days ... 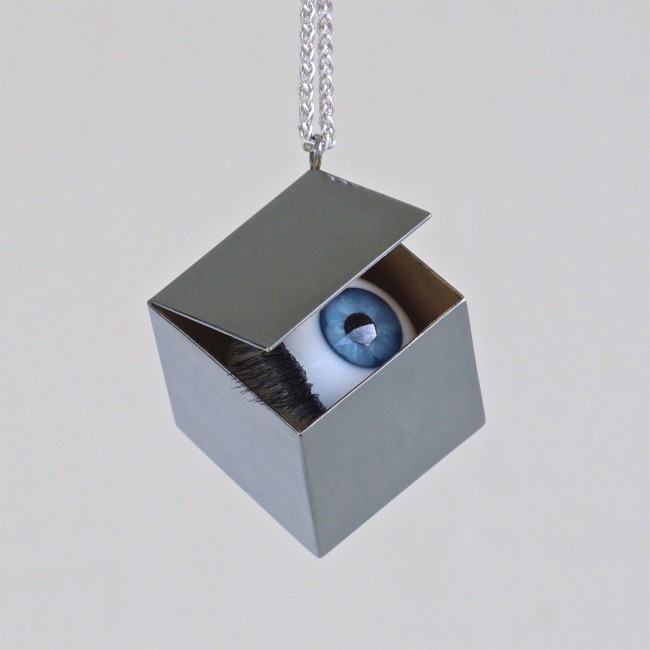 My jewel expresses feelings that many of us experienced during the Covid19 pandemy during lockdown, in quarantine or in isolation. One must or should stay home. Home is cozy, the fridge is well stocked, unread books are piling up, even a little artist's workshop is available, i.e. nothing essential for survival is missing. But eventually home turns out to be a golden cage, one feels locked in, anxiety may arise. There is a strong yearning to get out, for company, for stimulation, for normality.

The pendant is composed of two concentrically arranged basic geometrical forms, a cube and a sphere. Metallic gray on the outside, the cube both repels and protects. The golden inside signals safety and comfort. One side of the cube is folded open to allow both to gaze out and to look in. The cube houses a little glass eye carrying artificial eye lashes, an eye which sends a longing look outside.

The pendant "Sehnsucht" is best worn on a long, thin silver chain allowing free rotation for variable views in and out. Alternatively, place it on your desk as miniature sculpture. 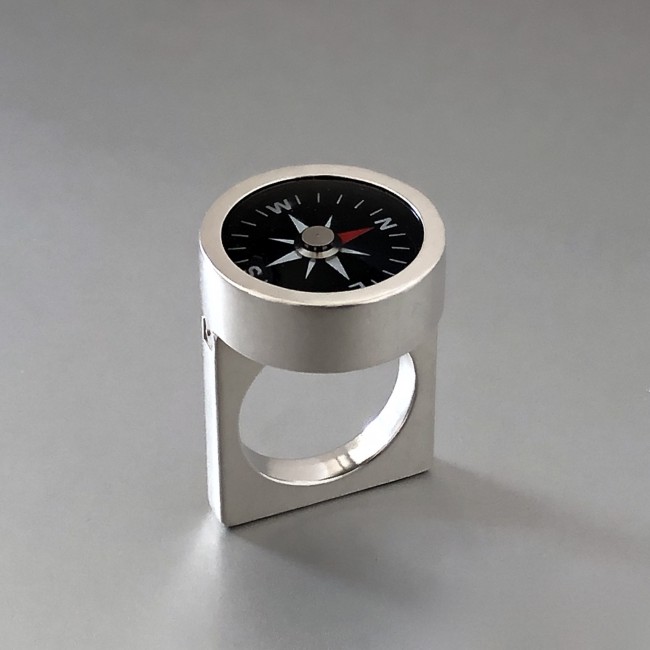 The Navigator and the previously presented Equilibrium ring (see link below) complement one another perfectly. Once you have found your base thanks to Equilibrium, the Navigator lets you define your target bearing at all times. 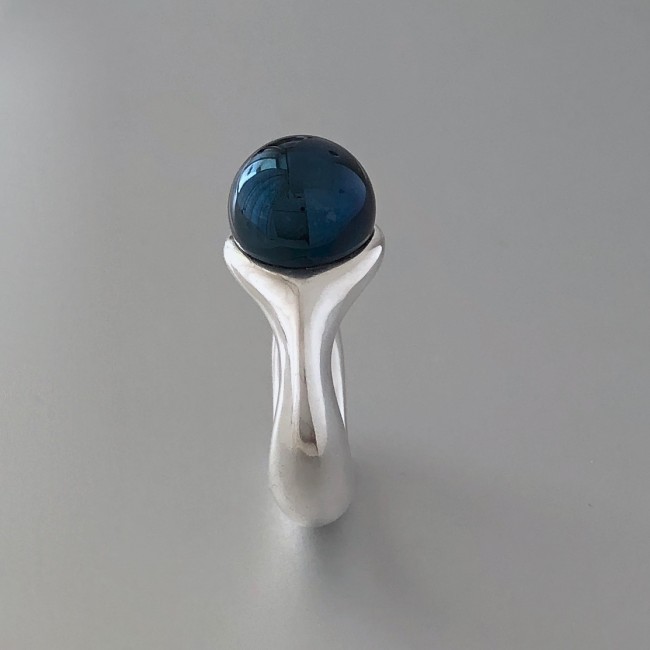 A while ago, I had bought beautiful, large blue-grey pearl, which I finally wanted to mount on a ring. The elegant curved shape of the ring was designed to showcase and celebrate the precious pearl. When preparing the pearl for the already finished setting I made a serious mistake, and the pearl was ruined! What should I do? In my fundus of materials I found a number of steel balls with exactly the same diameter as the pearl. Using my gas torch, I tinted a few of with heat (temper coloring), and mounted the best one on the ring. Thus, instead of the genuine precious pearl, the ring celebrates a mere piece of practically worthless although quite beautiful steel.